The Spring season of night tennis came to a conclusion on 15th and 16th December with many familiar faces receiving premiership medallions. Five different clubs shared the spoils of victory in the five grand finals.

The Tuesday Division 1 grand final was another enthralling encounter between regular combatants Lobethal Aces and Piccadilly Serve Smash Cheers. The Aces maintained their edge to win a close encounter 3 sets – 30 games to 3 sets – 27 games. Jack and Mary Young and Mary and Eric Harrison were undefeated throughout the season and the win made it three premierships since combining in Spring 2014.

At Bridgewater the home team Courtasones defeated Mylor Bunyips 6 sets to 1 to claim the Tuesday Division 2 title. The result was much closer than the scores indicate as 3 of the sets were decided by tie-breaker. Anthony Morriss, Ross Wall, Angela Mullan and Christine Ward added another medallion to their collection accumulated over the years of night tennis competition.

Upper Sturt Hit and Miss travelled to Lobethal to battle the undefeated Tuesday Tigers for the Tuesday Division 3 grand final. The visitors were victorious 5 sets to 1 to erase the memory of two close losses to the Tigers throughout the season. Regulars Rob Lorimer, Nick Seal and Annette Huxholl were joined by Marion Speedy, filling-in for the holidaying Hanna Pannewig, to avenge a 6 sets to nil drubbing 12 months earlier by the Lobethal H.A.R.D. Hitters.

The Wednesday Division 1 grand final was an Echunga derby between Hillbillies and Duncan Doughnuts. The Doughnuts added to their recent string of premierships with a 4 sets to 2 victory. Regular night tennis participants Gary Stibbs, Leonie Duncan and Ruth McLeod added Steve Noble to the line up and took the title in a very closely contested division.

Crafers Koalas defeated IBCG Cherry Slicers 5 sets to 1 to claim the Wednesday Division 2 premiership. Jake Hordacre, Jason May, Georgia Bradford and Emma Lowe completed a successful season with a hard fought win against the Cheery Slicers who played six people in the final to share the experience. 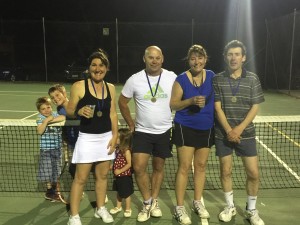 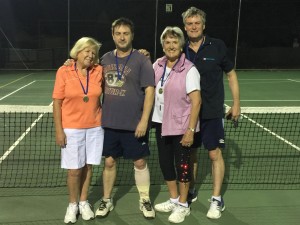 Please use the following link to access the latest HTA MC Minutes:

and any other days necessary to complete the Tournament

To be played at

Night Tennis information via this link: