It is with much sadness that we inform our HTA family that long-time player, Steve Thomas, passed away late this season. Steve played with the Uraidla club for many years and was well respected by those who played with and against him. Unfortunately Steve didn’t get to play the finals for Uraidla’s Div 2 Men’s team. Please take the time to read the beautiful tribute below, written by Uraidla President and good mate Chris Badenoch. 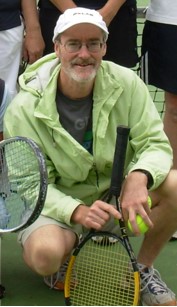 As a young teenager, Steve spent hours watching the A-Graders at Glenlea Tennis Club practice, enticed by their skills and abilities. One of the members there was Ray Woodford, father of Mark, a great tennis player in his own right, who became Steve’s idol. Steve went on to play for the club and progressed quickly to be a fine player with an incredible array of shots. Steve covered the court well, possessed great volleying skills and could play deep top spin and deceptive drop shots equally well.

Steve married his wife Chris in 1989 and newly weds moved back into the hills, where they both joined Upper Sturt Tennis Club and played in their Division 2 team. A premiership soon followed, and then a couple of seasons in Upper Sturt’s Division 1 team. In the mid 1990s the Thomas’ moved to Ashton where they lived for the next 25 years before moving to Hazelwood Park in early 2020.

In 1997 Steve and Chris joined the Uraidla Tennis Club competing in Division 1 Doubles. A premiership in that first year against Crafers was followed by a grand final appearance in the next, losing narrowly to Stirling. Steve stayed at Uraidla playing in teams in both the HTA and Eastern Districts. He has been part of a dozen premiership teams since that first year with the club, not only competing in Division 1 Doubles but also Division 2 and 3 Men’s Traditional in the HTA and Division A Mixed and Divisions 3 and 4 in EDTA.

Steve became an integral part of the Uraidla Tennis Club during his 25 seasons there, serving as treasurer for 10 seasons, and was also awarded life membership 2013.

Steve has been an inspirational player, not only to his friends and teammates, but also to his colleagues, peers and the many up and coming juniors he has played with and against during his time at the club. He was still competing in Traditional Two Men’s right up to the eve of this year’s finals when he suddenly passed away.

Steve Thomas will be remembered as a friendly sports loving family man, who will be sadly missed by his family, his friends and his colleagues in the hills tennis community.