The HTA was involved in the inaugural inter-association match against Great Southern Tennis Association on Sunday, Feb 22nd. Despite the very warm weather, the match was a wonderful opportunity to play against new people and to make new contacts and friends. Great Southern organised a perpetual trophy – the Ian Barry Esky Trophy. Ian was a highly successful player in the Great Southern Assoc for many years – winning premierships, club championships etc. But now the HTA is claiming him as one of ours! His success has continued with us – his most recent bragging point is being part of the Hills Country Carnival Div 1 Men’s winning side. Ian also contributes greatly to our Association – he is currently the Junior Activities Chairperson. 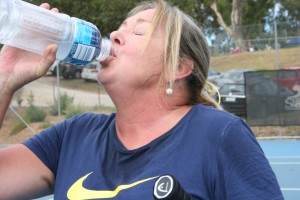 Libby captures how most players were feeling on the day – hot, hot, hot!!

Unfortunately for the Hills, we underestimated the strength, depth and skills of the Great Southern side. HTA went down big time – scoring only 4 sets, 96 games to Great Southern’s massive 26 sets, 173 games. A big congratulations to Dan Anderson, Mandy Saward, David Sandell, Jess Lang, Abbey Geue and Hayley Edwards who kept the Hills side alive and managed to score one set a piece off the strong opposition. Special mention needs to go to our number 2 women’s player Rebecca Smith (pictured below) who won both of her sets played on the day! Great effort guys! 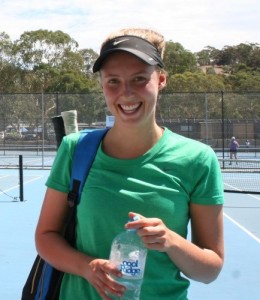 Rebecca Smith – what a girl!

All who were present on the day would agree that it was a fabulous day. From an organiser’s point of view it was great to see people who would normally play AGAINST each other, being put in the position of being team mates and playing WITH each other – the bonding of Hills players, new insights and understandings into each other and forging of new friendships was wonderful to see. The HTA have got some making up to do next year! We are already planning the timing and composition of the event next year and the we aim to seek revenge by recruiting more higher end Div 1 players.

So, for the time being, the Ian Barry Esky Trophy for the event is in the hands of Great Southern Tennis Association. It is our mission to bring it back where it belongs next year….. can’t wait! 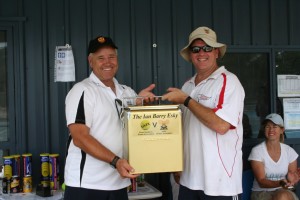 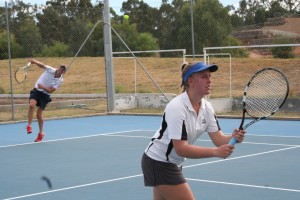 Paul & Hayley giving it their all. 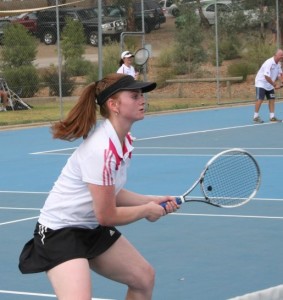 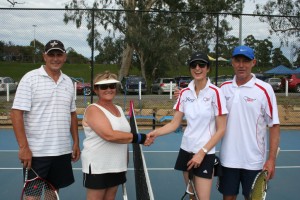 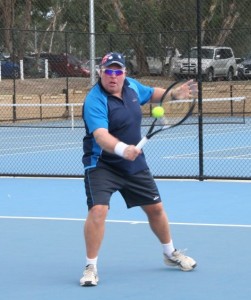 The ol’ boy’s still got it! Vice Pres (soon to be Pres) Myles in action. 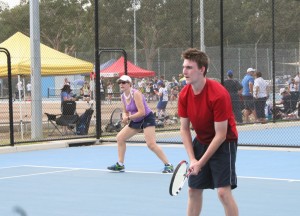